In the first part of our series on
bagging films we introduced what they are and the various advantages they have
in creating composites. In this next edition we’re going to get into more of
the nitty gritty of bagging films and what to characteristics they have.

Elongation, also referred to as
flexibility, elongation at break and tear strength are characteristics of a
bagging film that allow the bagging film to conform to tight radii and changing
contours in a part’s surface. Bagging films that are more flexible are less
likely to bridge a part. Elongation properties are added to certain bagging
films to make processes more efficient and to mitigate issues that come with
complicated bagging schemes. In short, bagging films with higher elongations
may offer a higher degree of forgiveness vs standard films. Especially when
considering the high number of pleats a bag may need for a large complicated
part. For someone just getting into composite bagging processes, a bag with
higher elongation properties will aid in overall part quality. In corners or
female radii along the tool, it takes only a small bridge in a vacuum bag to
result in the part being resin rich, having issues with porosity within the
parts radii areas, or worse, blowing a bag during cure which could result in a
scrap part. 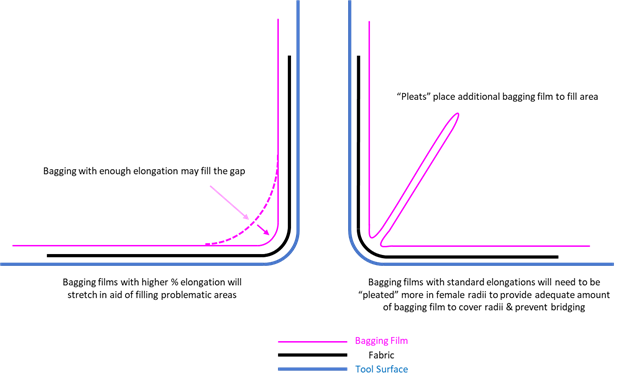 Illustration
for reference only as may not represent entire bagging scheme

When performing work with prepregs,
resin infusion, or traditional style layups, the thickness of the bagging film
plays a role in bagging processibility and the part’s cure. Thicker bagging
films usually offer an “easier” degree for workability than that of thinner
bags in that they do not fold over or crease as easily as thinner selections.
Although most bagging materials carry a standard 2 mil thickness, Prepregs and
traditional layup’s using vacuum will benefit most by using thick, soft, and
flexible bagging for most complicated layups and bagging schemes. However, when
performing resin infusion processes, using thinner or stretchy bagging films
may slow the rate of resin flow vs a standard film. This is also relative to
sizing of bags and projects that may be applied to.

A bagging film’s width should always
be taken in consideration for economical purposes. For instance, if a project
is a small part with a tool width of ~12”, the need for using a bagging film
with the width of 120” would not be economical. On the other hand, for a boat
hull or fuselage of an airplane, wider bagging material widths are integral for
processing effectively and choosing the correct bagging material is of utmost
importance. It is always better to have a bagging width that is too much than
not enough. Generally, choosing a film with a width that is 30-40% greater than
that of the tooling surface should provide an adequate amount of material for
pleating around the edge of the tool. For more complex contours of the part,
the bag should widen considerably as more pleats should be added around the
edge of the part. The exact figure of bagging widths is not usually done in one
part. Repeating processes usually gives better and more efficient numbers.

Vacuum bagging film can also be
affected by the humidity conditions present in the area it is stored and
exposed to. In areas on low relative humidity some bagging films will become
more harder to work with and may feel as if they are brittle. When exposed to
areas of higher humidity, these films usually become softer and easier to work
with. Some bagging films, such as Airtech’s Stretchlon series films will keep
the same properties in lower humidity conditions and provide consistency
throughout the bagging process.

Next week we’ll look at Bagging Film Applications & what may or may not work best for your particular use case or project.

Back to News & More