Breather Cloth plays a distinct role in providing complete compaction when working in conjunction with vacuum / autoclave cures. As a vital part of the bagging process, Breather cloth provides a physical layer of separation between the bagging film and the part. This small separation channels air and volatiles out while evenly consolidating pressure on the part as vacuum pressure is applied. Without Breather Cloth, on larger and complicated contours especially, vacuum sources alone struggle to provide evenly distributed pressure to the entire part under the bag. Unequal pressure conditions may contribute to quality issues in the final part and even safety concerns due to the inability for the curing resin to properly outgas. 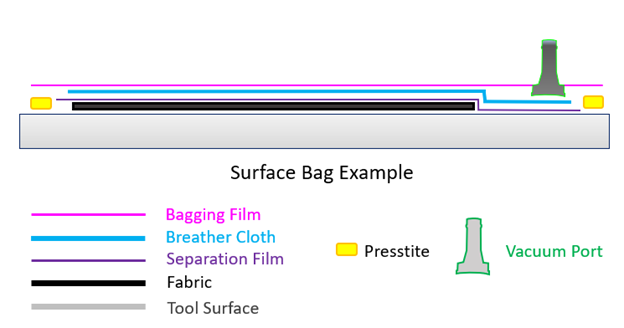 Breather Cloth is typically applied toward the end of the bagging process, just under the bagging film. All Breather cloth is generally known to be drapable and conforming to most layups and tooling configurations. There are plenty of breather choice options based on need and budget. Although all breather clothes generally look the same and provide a degree of air movement within a bagging scheme, there are options with material and structure that are important for their respective application. OZ Ratings & Temperature Capability are the main discerning characteristics of breather clothes in composites.

The OZ Rating of a breather cloth is basically a “density” of the breather. (Measured officially as oz / sq yard) This density corresponds directly to the amount of airflow a breather may draw out from under a bag and how quickly it may do it. For example, a 4oz breather cloth will be thinner and more conforming but will not allow air to be drawn through the part surface at the same rate as a 7oz or 10 oz option. Breathers consolidate down with the application of vacuum pressure. For applications under only vacuum pressure, 2oz or 4oz rated breather cloths will provide even pressure dispersion through most any vacuum bagging application, with the 4oz being a better option when using larger parts. In higher pressure applications or autoclave assisted cures, a 7oz or 10 oz breather cloth will mostly likely need to be used as pressures can vary drastically depending on the application.

In most industrial applications with prepreg layups, breather cloths are used exclusively for airflow, providing equal pressure. A thin bleeder cloth or peel ply is used for any possible excess resin rich areas. A separating film is placed between that and the bagging film. For smoothness in the finished part surface, a peel-ply is commonly used to provide a consistent finish along the surface of the part instead of applying breather directly to the top of the entire part. Peel ply being applied to the fabric surface will be the least likely to make any kind of impression into a part and provide an “initial prepped” surface for secondary bonding. Using a breather for the consideration of surface finish (Without peel ply directly over top) will leave a roughened surface, opposite of what one would expect from a tool side finish. In areas of the part where the breather cloth meets only the separating film, this surface finish would need additional prep or sanding to provide an optimum secondary bonding surface.

In processes or part areas prone to having excess resin accumulation, such as vacuum infusion or some traditional wet layups, using breather as a sort of “resin catch” may be used to mitigate the resin rich issue. When used in conjunction with a “perforated” release / separating film and a porous peel ply, resin will be pulled from the part out to the breather cloth. As the resin is vacuumed down and cured, the excess resin is pulled through the small pin holes in this perforated film and will hold within the breather cloth until cured. However, this most often results in having to throw away the breather cloth after the cure as it would then be useless for reuse.

Does the process just call to throw breather on top of every section of the part as a catch all?

Not exactly, placing breather cloth in the wrong areas of a part may lead to quality issues such as excess resin build up and bridging of the bagging film. In areas of tight female or male radii, it is best to allow the bagging film to make intimate uniform contact to the parts surface (with separating film between) It is important to leave extra bagging film in radial areas, allowing the bagging film to tightly conform to the part surface, providing optimum pressure application in which areas could otherwise be subject to bridging or wrinkling. 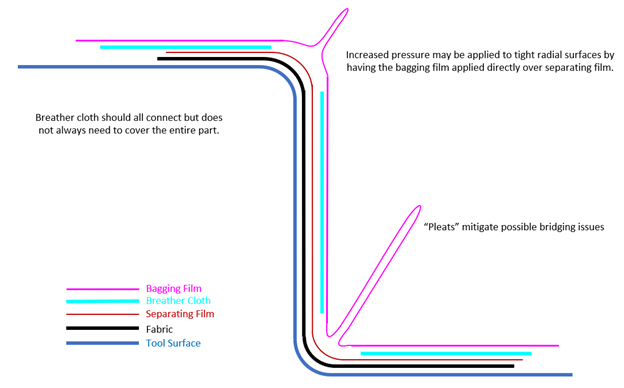 Fire Retardant breather is also used in high temperature and autoclave applications. (Usually above 400 ºF) The fibers used in this cloth provide the high degree of breathability needed for high pressure applications but also provide a high degree of protection in autoclave environments. These clothes hold self-extinguishing fibers that mitigate possible safety related issues where a fire could occur during the cure process of the part.